I have yet in my own investigations and conversations with any farmer or landowner come across one who believes that Fox's kill full grown sheep; never mind a foal or a calf. However, many know that fox will kill very young lambs (please see the detailed referenced article below). Myself, I have no doubts that full grown sheep are not killed by fox but fox will feed off a sheep carcass (please see my own trigger cam images below showing this to be the case). I believe that some full grown sheep that die naturally are then 'scavenged' upon by fox and then may be mistaken for 'non-native big cat' predation. The relationship between fox and adult sheep is one of relaxed indifference as the image below indicates: 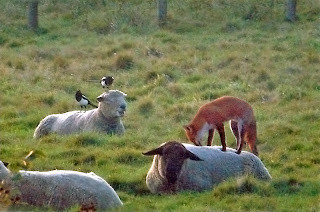 Studies based on questionnaires

Most farmers do not report any losses from foxes, although perceived losses vary across farms. Based on two questionnaire surveys sent to a total of 763 sheep farmers across Britain, lamb predation was perceived to be a relatively minor problem on the majority of farms. Between 39% and 76% of all farmers responding to these questionnaires reported no losses of lambs to foxes….However, perceived losses varied considerably across farms, with higher losses perceived on larger farms and in regions of high fox density.

Studies based on actual lamb losses

A study on two Scottish hill farms showed that predation by foxes caused a maximum of 6% of lamb losses and these were equivalent to 0.2-1.5% of potential revenue lost from lamb production. Lambs were largely predated at young age, in the period between birth and six weeks of age.

The majority of lamb mortality is due to poor husbandry rather than predation. In a study of 108 UK sheep farms, the following factors were linked to higher lamb mortality:

From this study it was concluded that, to reduce mortality in lambs, farmers should improve the condition of ewes at the time of breeding, maintain good hygiene standards at lambing, supervise young lambs and employ similar good husbandry practices. In 1998, a study by the Ministry for Agriculture, Fisheries and Food (now part of the Department for Environment, Food and Rural Affairs) calculated that each year 4 million lambs are lost at a cost of £120 million for the industry. Deaths due to all predators (i.e. not just foxes) and misadventures combined account for only 5% of this figure, whereas 95% is due to poor husbandry and a variety of management problems.

Download After the hunt. (PDF file, 1.7 Mb). Available with permission from IFAW

Two images below show the relaxed indifference between fully grown sheep and fox.  Whilst the other two images show fox scavenging upon a sheep carcass (which may on occasions be presented as evidence of big cat predation). 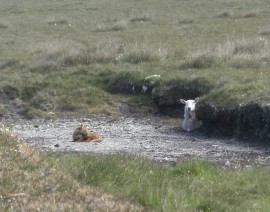 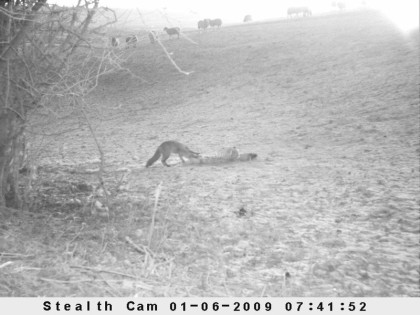 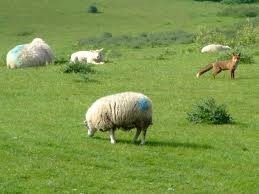 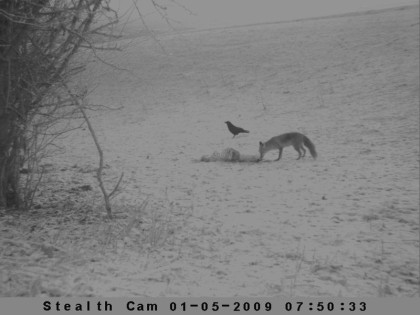