The following photographs are part of an investigation undertaken by myself and Paul Westwood of Big Cat Monitors. In 2006 Paul & I were asked to investigate the mysterious death of two Alpacas taken and killed from out of a wallled compound housing twelve other adult Alpacas. What is remarkable about this is not the damage to the animal (as this is inconclusive) but the nature of an animal being killed. Alpaca's have been introduced into Great Britain to protect herds of sheep from marauding dogs. Alpaca's will attack dogs and have little or no fear of them. The two dead Alpaca's, one of which is photographed below, was taken from a herd of twelve Alpaca's over a large compound wall. A number of experts in animal behavior have found this staggering and unlikely to be the work of a dog, or dogs, whatever their size.﻿ 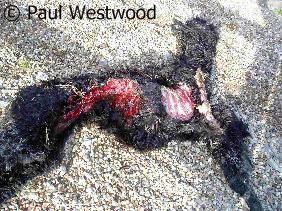 After a three day investigation of the area several witnesses were found who had seen a large black Labrador sized cat in the area. All were interviewed and all were found credible and knowledgeable in countryside issues. It was agreed with 'Key Witness A' that they would keep in touch should matters develop further. Two weeks prior to my investigation of the Alpaca the following ram was found dead in the field next to the Alpaca enclosure (see picture below).﻿﻿ 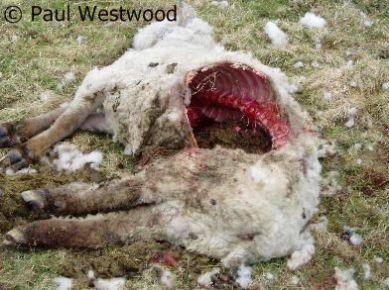 After consultations with experts in Big Cat behavior there is left a strong conviction that a Big Cat has killed this ram. Paraphrasing their comments it would appear that,

'a single large cat had killed the ram and had had time to eat the kill at leisure before being disturbed. A dog or several dogs was ruled out due to the clean nature of the area being eaten (no bite marks or damage was found on any other part of the kill)'.

Please note that whatever had killed the ram has eaten through the ribcage of the animal suggesting that Badger had not been scavenging the carcass (please see  Scavenging by Badger section).

As a footnote several lambs have also been killed after the death of the ram and the investigation continues.﻿﻿