Due to the professional and high profile nature of these witnesses and their request for anonymity I am loath to provide actual investigation photographs of the locations of events. I have therefore added photographs which are typical of the location where the sightings were made.

A professional person with qualifications very conducive to the identification of cats & dogs (indeed their qualifications & experience are of such a unique nature that they could be used on the witness stand in a legal case). Witness 'A' was out riding their horse along a trail through a local forest. The horse stopped and became very uneasy. About thirty seconds later as witness 'A' was trying to reassure the animal a black cat larger than a Labrador, with a very long black tail, walked out into the forest track about 5m in front of witness 'A'. It stopped in the middle of the track & looked at the horse; it then flicked it tail, and walked into the dense foliage the other side of the trail. When the witness was asked if they could have mistaken the animal for a dog? The witness stated,

'I clearly know the difference between a cat and a dog'.

I again state that witness 'B' has highly creditable qualifications and experience to substantiate the aforementioned statement and the sighting as a whole.﻿ 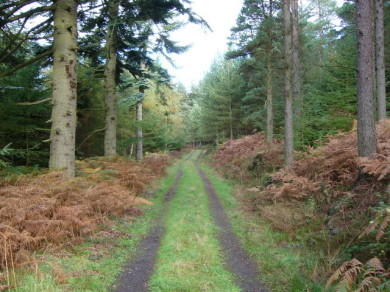 Once more a highly qualified individual, a specialist whose qualifications include making assessments of animal movement patterns as well as holding a prominent and active fieldwork role within a well known environmental organisation, had a close encounter with a Big Cat whist undertaking an environmental survey. The witness was walking in a valley dotted with woodland. Walking along the side of a hedge a very loud and strange 'cat like scream \ hiss' was heard behind the witness. The witness turned round to see a black cat about the size of a Labrador with pointed ears and a tail as long as its body emerge from a bush which they had just walked past. The cat looked straight at the witness, from a distance of no more than five meters, for about thirty seconds and then turned and walked back into the bushes. The witness was somewhat taken aback and walked away slowly facing the bush the cat had emerged from. Once more to protect the identity and location of the individual more specifics of their expertise in animal identification has been withheld. I have no doubts that their expertise and experience in animal identification makes this person an extremely reliable and credible individual.