This investigation is currently ongoing and involves working with the owners (Witness A) of a farm who for a number of years have been regularly experiencing the deaths of their livestock. On two occasions at early dusk they have seen a large black cat with a long tail about the size of a Labrador. A close personal friend whilst riding a horse in a nearby wood was thrown when their horse reared as a very large black cat stepped out in front of the horse when riding down a forest clearing. The owners have involved myself in their experiences after they found their latest dead ewe. The ewe had been killed about 30 yards from the bottom left hand corner of this field (see picture below): 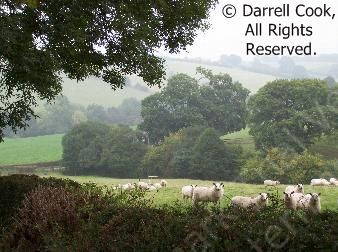 The ewe was then dragged to a small dell hidden by trees with a small stream running through it. This dell is well hidden and can only be seen within ten yards of where the carcass was devoured (see picture below): ﻿ 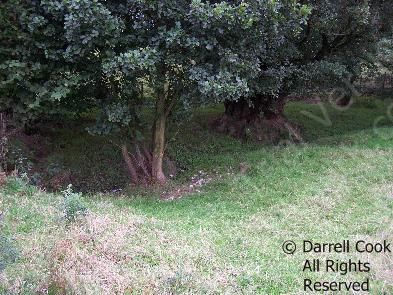 This breed of sheep at this age would on average weigh 79Ib; the remains of the carcass on the date of the investigation was 19Ib. The sheep, when alive, was noted by the farmers as being a little under the weather at 9pm the previous evening and in the morning the witnesses went to check if the animal's possible condition had worsened. What they found was the remains of its carcass with puncture wounds to its neck, its spine broken in two places and several ball and socket joints in its legs cleanly dislocated; no trauma or bite marks were found around the joints (see picture below):﻿﻿ 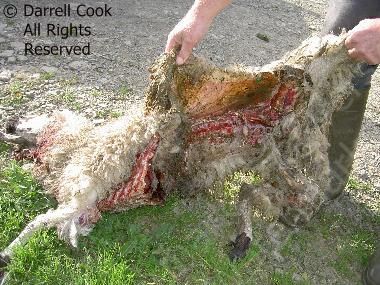 ﻿ I inspected the dell for an hour for animal tracks and found no tracks at all; neither fox, badger, dog or cat. This sheep appears initially to have been killed by a bite to the throat and probably then suffocated (see picture below):﻿ 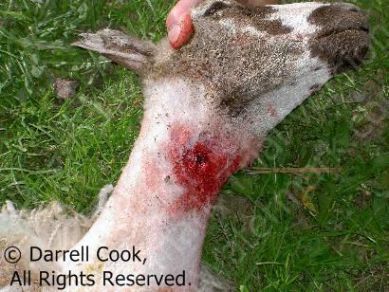 As you can see the puncture wound is clearly visible and above this a pressure mark can be vaguely made out but sadly was not clearly recordable on film. What was recorded in the next photograph were two clear bruises more than 12cm around from the aforementioned clear puncture wound (see picture below): ﻿ 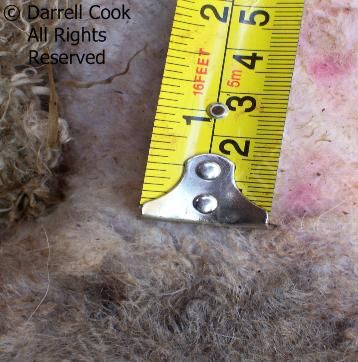 ﻿The next photograph shows the ewe's neck after it has been skinned and shows the clear hemorrhaging around the windpipe area of the animal. After examination it was found that the windpipe was not crushed or punctured. It is surmised that the predator applied just enough pressure to suffocate the animal. Perhaps that’s why the animal did not need to break the skin on the aforementioned photograph? (see photograph below):﻿ 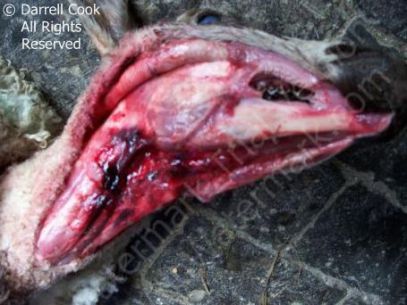 However, this may not have been the cause of death as the next photograph shows the spine of the sheep snapped in two close to, but not at, the base of the skull (see image below): ﻿ 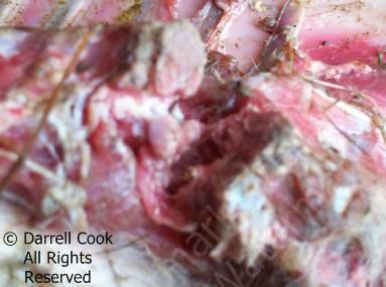 ﻿Was the sheep dead or dieing from the broken spine before it was suffocated? Or was the spine broken in the initial attack when the predator affixed itself to the sheep's windpipe? As I'm not a Big Cat Expert, in any sense of the word, I find the case perplexing and with the undoubted knowledge of the witnesses, the number of Big Cat sightings in the area, and the unlikely cause of this death by a dog (taking into account that no other sheep were damaged during the attack and my investigations of other Big Cat events) perhaps a Big Cat was involved?

Further to this during my two day investigation of the area a scat (animal faeces) was found that did not match any I or the farmers had seen before, nor my book on animal tracks and signs. Photographs of the scat have been forwarded to animal experts in the field of Big Cats and should the picture prove to be of interest the scat will be forwarded for examination (the results of this will be placed upon the site once received). The investigation continues.......﻿

N/B The scat proved to be a large domestic cat faeces.