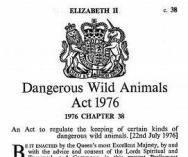 What is the Dangerous Wild Animals Act 1976?

The Dangerous Wild Animals Act of 1976 was originally introduced as a private members bill in response to public concern about the keeping of dangerous pets; especially Big Cats. It aims were to ensure that where private individuals keep dangerous wild animals they do so in circumstances which create no risk to the public and safeguard the welfare of the animals. The following extract from the Act shows the section relating to what is defined as a Dangerous Wild Animal:

The following is [a partial] list of animals for which, when kept privately, a license is required under the Act.

Carnivores: Canis familiaris: Jackals, wild dogs, wolves and the coyote (foxes, the raccoon-dog and the domestic dog are excepted).

Felidae: except the species Felis catus The bobcat, caracal, cheetah, jaguar, lion, lynx, ocelot, puma, tiger and all other cats (the domestic cat is excepted)

How does it work?

Licenses are required for any animal which appears on this [aforementioned] schedule [of] the Act. These [licenses] are issued by the relevant local authority, and will only be granted when the authority is satisfied that it would not be contrary to public interest on the grounds of safety or nuisance; that the applicant is a suitable person; and the animal's accommodation is adequate and secure.

What does this mean and what were the affects?

In 1976 it became law that anyone who kept a potentially dangerous animal in a private collection (as mentioned on the aforementioned list) had to build animal accommodation appropriate to the animals needs and that this accommodation also had to be adequate and secure. Some people may have found the costs and commitment needed to do this prohibitive. It is believed that some big cats were released into the wild due to the demands of this legislation.

But what does adequate and secure mean? Building a secure compound for Big Cats is a massive undertaking for an individual or organization. The act requires someone to be on the premises 24 hours a day, security cameras have to be in place, numerous wire fences have to built enclosing an area of land appropriate to the needs of the animals. The cost of such a venture must be huge?

﻿ Does the implementation of this act partially explain why we may have non-native Big Cats roaming the British Countryside?